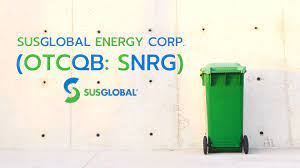 The circular economy is now getting a lot of attention since it reduces waste to such a degree and that may bring companies like SusGlobal Energy Corp (OTCMKTS:SNRG) onto the radars of investors. At this point in time, the company is best known for having come up with SusGro, which is a highly innovative pathogen-free liquid organic fertilizer and has also won awards.

SusGlobal is described as an industrial, agricultural and environmental biotechnology company, which is involved in developing proprietary technologies in regenerative product applications at a global level. Hence, it could be said that it fast emerging as one of the major players in the budding circular economy. Investors who are interested in the stock could do well to take a closer look at the company’s second fiscal quarter financial results, which were announced back on August 24.

The performance was not particularly great as the company generated revenues of only $110,143, which proved to be a drop of as much as 48% from the revenues of $212,632 in the prior year period. SusGlobal noted that the drop in business had been brought about due to a change in its customer base due to the organic composting and water processing facility that it runs.

Marc Hazout, who is the President, Chief Executive Officer, and Executive Chairman of the company, noted that the company was working on an acquisition strategy so as to open its second plant which was going to be used for the production of its liquid organic fertilizer.